What causes are when the vascular system is flying away, why stroke happens in children and how to overcome the disaster? 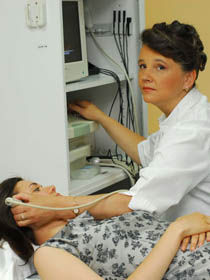 Yesterday, on October 29, the issue of insult was widely discussed among the people. All-day struggle to protect yourself from this disastrous, respect for people to disastrous proportions of the problem reminds results of negligence of the health and the importance of preventing measures. According to the experts, every second minute in the world one persons has a stroke, and every sixth minute someone dies of it. In Ukraine, annually 100 thousand of new cases is registered. One third of patients are capable people. What are the causes and what leads to such sad consequences, we asked an expert, a researcher and a physician, doctor of medical sciences Ulyana Lushchyk.

«Stroke – payment for negligence to your health»

— Ulyana Bogdanovna, annually about 6 million strokes registers in the world, in the countries of Western Europe – 1 million. Stroke mortality comes second after cancer. At the same time, awareness of the risk factors for vascular disease in Ukrainian society is very low. What do you think as a specialist about this?

— There is one, perhaps unpopular thing to note here. Most often, a stroke is a payment for a person’s negligent attitude to his health. My experience shows that even among our acquaintances – scientists, doctors – there are many who underestimate the problems of their body. Even if a person already has certain symptoms and you tell him – go, check your body, make a diagnosis, the person will find 125 reasons to justify his unwillingness to help himself. There is no time, work, family, and then a stroke and all – goodbye to the grave … And those times are all the more annoying when you know that a catastrophe could have been avoided if one really wanted it. Therefore, I am certain – stroke occurs in those who do not love and respect their body.

How dangerous is this illness? Stroke can be compared to a phenomenon like a mismatched, unbalanced orchestra. When every organ and body system “plays” as they wish. And this imbalance does not allow the vascular system to work in unison. Imagine 50 flights departing from one airport at the same time and the flight attendants did not agree on a flight plan and corridors for the liners. As a result, accidents occur at different levels. In the same way during a stroke – at least 8-10 parts of the body “fall”. For the living system, it’s a disaster. By the way, stroke in translation means – a brain catastrophe. The brain cannot respond differently to this situation and simply shuts off, the person falls into a coma. Therefore, the body is unable to control itself. And how to get an organism out of a state of extreme chaos is a matter of competence, even the art of a doctor. But of those eight links, only 2-3 are restored. Others are often unrealistic to bring back to life, because there are no “tunnels” that could carry blood. Surgery sometimes helps to restore only one area.

— Stroke is one of the most common causes of disability. According to statistics, 60% of patients who have survived a brain catastrophe become severely disabled, 30% have persistent disorders and only 10 percent return to full life. What factors are more important here, the doctor’s expertise, the patient’s will to live, or something else?

— First of all – the ability of the vascular system to recover. And this system is multi-vector. It is necessary to take into account both the blood pressure, the speed of its movement in vessels, and the elasticity of the vessel, its permeability, caliber. Figuratively speaking, you can go on a country road, or you can fly by autobahn. Similarly, the vascular system has its “highways” and “country roads”. And if a person has stroke and “country roads”, then how to restore the state of the brain that lives on the “highway”? It is unrealistic … My analogies may be surprising to some, but the vascular system is similar with water supply. And you cannot wash anything  with a drop. Moreover, you will not “start” the brain.

Today, talks are popular about atherosclerotic plaques in blood vessels. Yes, they were and will be. But they should not be cyclical, because there is another system – the venous, which few people know. And this is the “sewer” of the whole organism. And if there is no normal movement of blood in the veins, thrombosis and embolism also occur. Therefore, it is necessary to treat the problem in complex, and even better – to prevent it.

— What alarming “bells” should alert a person? Which signals approach a stroke?

— The first symptom is weakness, impaired speech, sleep, malaise, irregular feelings, inadequate working capacity when planning the usual affairs, and instead you do not finish anything. Any of these symptoms have come – it’s time to start worrying. The onset of stroke reports about periodic disorders of the cerebral circulation. Even a banal hypertensive crisis, if it manifests itself not only by a significant rise in pressure, but also by nausea, short-term disabling of consciousness, limb constipation, and impaired speech, telling that the brain is bad. Neurosurgeons call these symptoms the “first swallow”. If you respond to them in a timely manner, undergo appropriate treatment, the body will thank you. And if the “master” of the body ignored these signals, then instead of “swallows” he receives hospitalization, resuscitation … Therefore, once again I emphasize: disrespect for his body turns to a person with serious health disorders.

— Your colleagues and you have repeatedly emphasised the “rejuvenation” of strokes. How acute is this problem?

— In my college years, a 50-year-old stroke was considered an extraordinary event. When I worked as a young doctor and wrote my PhD thesis, a stroke of 40 years was considered a disaster. And when I was working on my doctorate, stroke in children was seen as an almost unreal fact. Unfortunately, nowadays acute disorders of cerebral circulation among children are becoming more frequent and very difficult to tolerate. During the day the baby can fall into a coma…

— A stunning thing – a stroke in a child … Why it happens?

— Environmental pollution, stressful conditions in which a woman is pregnant, do not allow the vascular system to form properly. So it is already distorted in the womb. How exactly? The vascular wall has three layers. And one of those layers may be underdeveloped, have a gap in which the mucous membrane falls. Thus, aneurysm is formed. Children now often have aneurysms of the brain vessels, which manifest themselves as a stroke even at three – five – seven years. In the midst of complete, seemingly prosperity … And these cases are so cruel that it’s really hard to talk about. Therefore, I have always insisted on the “certification of newborns.” When a baby is born – it is necessary to carefully examine his vascular system, because many moments can be predicted and prevented. And so save health and life. Moreover, modern medical technology allows you to do these things at a high level.

— Overloads and stress can also be considered as a trigger for stroke among young people?

— Certainly. We all come from the agrarians. The shepherd in the pasture is one model of functioning of an organism, and intensive mental work in a metropolis, constant vanity of vanities and specifics of modern life require absolutely different rhythms. We live in the mode of Internet technologies, daily we exchange tens-hundreds of emails, mobile messages, so it is clear that the brain is forced to work ten times more powerful. And the intensification of thought processes, the need for a quick solution and an immediate answer to hundreds of questions require much more efficiency and workload on the brain and vascular system.

«The body cries for help, and we continue to “press on gas”…»

— What should a person know to prevent vascular disease? What preventive measures would you recommend??

— Today is a very topical mobility. When we sit at our computers for hours, we talk online – there are emotions and there is no movement. When we get behind the wheel of a car, because we need to move quickly, the body is also almost motionless. Because there are no adequate stimuli, stagnation occurs in the vascular system. Take time for morning jogging, exercises, swimming, if briefly, ” love yourself”. Help your body feel comfortable.

I understand that we have never been accustomed to a health culture that is generally characteristic of the Slavic world. But life is so intense now, and it is survived by one who pays enough attention to his health. The body works by itself if it is in a normal state. When signals are coming from it, they are “bells” about troubles. And they need to respond immediately.

— And in time to make preventative medical check-ups?

— I might say a little disharmonious, but apt. Car functioning and the human body has many similar things. There are two approaches to the car – either you are a good driver or a bad driver. What’s the difference? The good driver looks after his car, feels it, it is his “partner”. The bad driver only uses his car, careless. It is clear that the car in such an owner is scratched, beaten, not started from the first turn. And this “somehow it will be” in relation to the body does not just happen. The body also needs periodic “check-up”. The body very often and patiently goes to the rescue of its owner. Some stresses the body goes through with us in silence. But when the exertion is behind, the body cries out – restore me! And if you ignored the request, in a few months you may have big problems.

Experience shows that after 40 years every six months, a person should diagnose the condition of the vascular system and receive adequate treatment if necessary. Time should be found for this – even with heavy employment. Otherwise, problems accumulate, and then the slightest stress, overload, sleepless night, even a sharp change of weather – and the vascular system “flies” over the gill, because it cannot fully function.

We are ordered to...

How being in total stress not to fall into depression, fight back ailments, turning helplessness optimism? Chronic stress – is not just excessive but vitally dangerous test for the organism. Ukrainian societies due to political events are forced to live in such conditions too long. How to preserve their physical and mental health? –  I speak with the capital specialist in vascular...
More

Humanity has been trying to decide the problem of crimes for many centuries relying on either law wisdom and punishment severity or legal rules compliance and proper youth upbringing. It means that this problem is traditionally understood in social, psychological, and ethic aspects. But there are reasons to hope that the progress of the scientific thought will allow to consider and, what is of...
More

Here there is an atmosphere of comfort, tranquility, kindness. Here you will be welcomed, carefully listened to, examined with the latest equipment, prescribed treatment and inspire hope. Here – this is in Istyna Kyiv Scientific and Methodological Center for Ultrasound Medical Diagnostics, our correspondent is talking with Ulyana Bogdanivna Lushchyk the head of the Center. – Ulyana...
More

Ulyana Lushchyk, MD is not afraid of exotic diagnoses. Talking with this vivid woman, I unintentionally find myself thinking that it is she who fits the phrase: “a self-made person”. Having arrived in Kyiv after graduating from Ternopil’ medical academy, a young doctor continued learning the secrets of the human brain – she was interested in that since she was a student. In ten years she...
More