Arabesques by henna on woman hands

First, that I wanted to try is to feel myself as the Arabic woman with drawing hands and feet by a henna. As it appeared later, it is the festive “outfit” of the Arabic women for festive evening-parties, for fiancee, for a favourite man.

The first time of “equipment” with arabesques on a traditional festival in Oman I was pleasantly staggered, that all men positively pay attention to these pictures on hands and feet, approvingly smiling, without any displays of lewdness or scorn.

After a few attempts to live in this character, I understood that this image impresses me. Patterns on hands create a positive mood and complement femininity for business woman. Gradually these patterns became my new image in the Arabic world and met with my new character of the Ukrainian-Arabic woman. 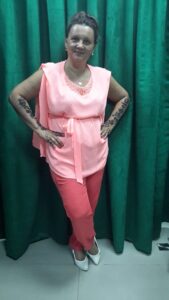 Than 2 events happened. Once, when my husband Victor visited me in the Arabic world, I understood that he had not yet seen my pictures on hands, only on a photo. And I decided to do a pleasant surprise for him. In the evening my darling was simply pleasantly staggered and did not show some extraordinary fascinations.

The most interesting began in the morning, during breakfast he moved dishes away, Victor unexpectedly began to take pictures of my hands. And I understood that it was not simple arabesques, they were an element of femininity, woman attractiveness, possibly the hidden flirting, unverbal fascination and others like that.

My project proceeded. And here was a meeting of my class-mates, 35 years ago we graduated the school and remained good friends for life. I arrived on this celebration with arabesques on my hands, even not thinking of “consequences”.

The first reaction did not linger – questions began “what is it? and “how?”.

The evening was fabulous with an accent on arabesques. To the end of the evening my class-mates ripened to the idea, that years 40 back I as a member of the komsomol, an activist and a head of class, would be excluded from the komsomol for an “amoral” conduct with foreign influence.

However today guys with fascination looked on my hands, commented positively, and girls afforded to touch my hands and at the end of evening began to question where can they make such miracle for them.

The morning educed another positive of arabesque-therapy – one my class-mate decided to do something like a scale on hands and goldish claws on nails, that shows unrealized features of Dragon. 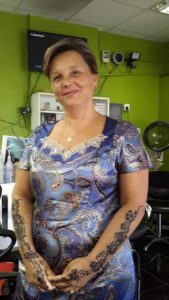 I understood now, that my arabesques would become the inalienable element of my image as a business woman for underlining of romanticism and femininity. Possibly the Ukrainian woman should demonstrate exactly the external lines of femininity for emotionality in daily life, in fact Ukrainians quite often occupy dominant position in family and society, forgetting to show own beauty and femininity.

I can not explain everything, however arabesques substantially changed my character in my life, style of conduct, manner of communication, adding a considerably charm to my woman Ego.  I beholden to the fate that I got in the Arabic world for self-perfection as a magic woman.

It is possible that in course of time arabesques will become the new breathing of fashion in Ukrainian society and will take the deserving place in positioning of sensuality for the Ukrainian woman.

Embroidery in the Arabic culture.

The arabesque is a form of artistic decoration consisting of “surface decorations based on rhythmic linear patterns of scrolling and interlacing foliage, tendrils” or plain lines, often combined with other elements.

Another definition is “Foliate ornament, used in the Islamic world, typically using leaves, derived from stylised half-palmettes, which were combined with spiralling stems”. It usually consists of a single design which can be ’tiled’ or seamlessly repeated as many times as desired. Within the very wide range of Eurasian decorative art that includes motifs matching this basic definition, the term “arabesque” is used consistently as a technical term by art historians to describe only elements of the decoration found in two phases: Islamic art from about the 9th century onwards, and European decorative art from the Renaissance onwards. Interlace and scroll decoration are terms used for most other types of similar patterns.