To the greatest regret, today’s statistics of Ukraine and other countries of the world represent mainly negative tendencies, namely cardiovascular diseases are an urgent medical and social problem nowadays because of high rates of morbidity, mortality and disability, indicating the low efficiency of applied methods for vascular diagnosis and treatment.
Even in the theory, not to mention in practice, physicians do not have a single integrated approach to the vascular system. As for existing methods for diagnosing circulatory system diseases, we can talk about the dominance of static methods such as X-ray contrast angiography and magnetic resonance imaging in angiomode.
Ability to detect atherosclerotic plaques and thromboembolus applying the newest diagnostic methods provoked the creation of new fields in medicine—angiosurgery and cardiosurgery with allegedly radical approach—which found the cause of and managed vascular decompensation. Everything seems to be acceptable, but why do some post-operated patients often have temporary improvement and relapses often occur?
The catamnesis shows deeper disorders in the whole CVS as a complex system of interconnected tubes with different caliber and specific features of their walls and biophysical blood properties that can be called as a liquid only in theory. 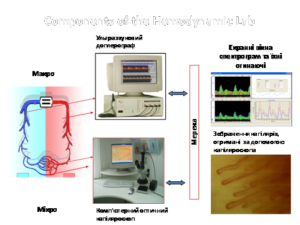 The time requires creation of a single technological complex for integral life-time dynamic diagnostics of CVS in a patient in one-moment on various regional and systemic levels with an output of analytically processed results for clinical interpretation and assessment of CVS reconstructions in norm and in pathological states by a physician.
Today it is urgent to create a new direction for target medical management of CVS under instrumental control on the basis of evidence medicine with profound knowledge of the vascular channel functioning – angiotherapy.

Such approaches allow to increase efficiency of treatment of patients with vascular pathology in 3-8 times depending on involving of chaos mechanisms in CVS functioning.
A mathematical modelling enables to model some variants of vascular reconsttructions and develop the theoretical model of optimal treatment scheme combining angiosurgical and angiotherapeutic influences. That will allow to obtain optimal results, reduce or even prevent appearance of reperfusion syndrome after angiosurgical interferences.
Hemodynamics (of Greek haima – blood, dynamis – force) is a science, which appeared and is developing on the crossroads of hydromechanics and biology, it studies blood movement in the closed vascular system of the human organism taking into account morphological structure of blood, its physical-chemical characteristics, specific features of vascular wall, dynamics of the live system with applied adoption of the hydrodynamic postulates.
Fundamentals of vascular bloodduct functioning
1. A gradient of hydrostatical pressure in different segments of the vascular system, which is formed due to the pumping function of the myocardium.
2. Rheological properties of blood as dispersion of blood elements with properties of not-newtonian liquids.
3. Blood vessels as viscidly-resilient tubes, which properties (geometrical – sizes, branching and physical -viscidity, elasticity, permeability) differentiate by diameter and length. 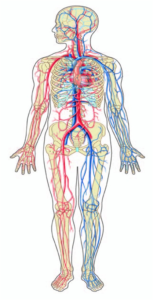 The cardiovascular system (CVS) can be compared to the pipeline: it is the closed system of the united tubes of different caliber, which due to work of heart as a pump provide motion of blood in arteries and veins.
It is characterized by the permanent and variable parameters of vital functions with high adaptogenity in norm to the internal changes and external changes in environment.
A model of vascular bloodduct
Water-supply system functions very on this principle namely water spontaneously flows from high pressure to low pressure.
In the living system cardiovascular, partially digestive and secretion subsystems correspond to this type of functioning.

Specific functioning of the vascular hemoduct
 vascular tubes are elastic,
 a cardiac pump forces blood in a vascular bed unevenly,
 vascular wall can be porous and pervious to liquid into sorrounding tissues at pathological states,
 veins always accompany arterial tube and are dampers and absorbers of hydraulic strokes.

All haemodynamic parameters in CVS constantly change and for adequate work must be subject only to principles of selfregulation and synergy between different segments of CVS, changes of intravescular longitudinal and transversal pressure and other, to balance of inflow-outflow of blood, arteriovenous anr arteriolar-venular balance.

Principles of stabilization of balance in bloodduct
A living organism functions normally when there is a balance in the vascular pipeline between:
 blood pressure intravascular resistance,
 arterial and venous links in the major and peripheral segments of the vascular system,
 arteriolar and venular links at microcirculatory level,
 elasticity and framework resistance of vascular wall etc.

Thus, an original vascular homoeostasis is formed, due to this in norm CVS can provide optimal terms for existence and vital functions of the organism at changes of meteofactors and psychoemotional overloads 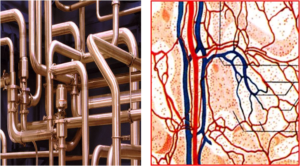 Chain reactions of pathological alterations in a vascular pipeline
Instability even of one parameter in work of a vascular pipeline (for example reducing of vascular tone at a vegetovascular dystonia) in due course results in disorder of functioning of the whole vascular system and progress of the pathological signs (in particular, disturbance of distribution of pulse wave and blood pressure in CVS) which causes development of a disease, – endarteritis, atherosclerosis, thrombosis, embolisms and others)

Disbalance in bloodduct
The disbalance of functioning in CVS reminds the unconcerted orchestra and responds to all laws of development and growth of destructive processes – chaos – locally in one vascular pool (cerebral, kidney, hepatic, etc.) or simultaneously in all.
In this case it can be a collapse, thromboembolia, sudden heart arrest and (even) clinical death.

Without corresponding (adequate) treatment the third, heaviest stage results in decompensation in CVS functioning.
Unstable system can’t function properly even in the base-line mode, but at the additional loading suddenly may have serious failure in functioning.
Chaos of 3rd stage in booldduct is a direct way to the force-majeure
Stroke, heart attack is the catastrophic states which arise as a result of expressed disbalance in functioning of the whole vascular pipeline – CVS decompensation on a background of the extremely expressed chaos of 3 stage.

Such patients are considered to be meteodependent on the early stages of disbalance of the cardiovascular system.

Theory of vascular pipeline
We offer a mathematical model for vascular pipeline, which represents blood motion in the closed system with the numerous blood vessels of different caliber, pressure, wall features, elastic-tonic properties of vascular wall, distal resistance and other and by control of these parameters in an arterial, capillary and venous channels. 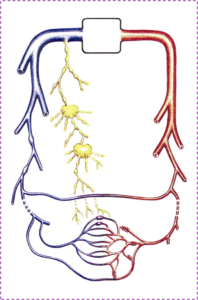 Hemoduct is a single, integral, closed system of vascular tubes, which provides clearly hierarchical function of regular, rhythmic transfer of blood mass from the heart to capillaries of organs and systems by the major and peripheral arteries and back by venules, peripheral and major veins to the heart with the purpose of trouble-free physiological blood supply and life-support for organ and the organism.
A role of the vascular pipeline is for trouble-free blood supply of all organs and tissues of the human organism.
Capillaries, which form the microcirculatory channel, are an ultimate component of blood supply. Thus, visualization of microangioarchitechtonics and blood filling of capillaries is crucial for evaluating the quality of the entire hemodynamic system functioning. Disorder in the capillary blood supply says for problems in the whole system functioning.
Methods of the vascular system diagnostics may be grouped:
 direct methods of imaging – giving a visual information of structural changes related to a pathological process;
 indirect – giving the information in the form of numbers of certain coefficients (parameters) known to a researcher, or in the form of diagrams;
 combined – a simultaneous objectivation of structural and functional changes in the vascular system.
A static image of vessels is only the fact statement, but not treatment. 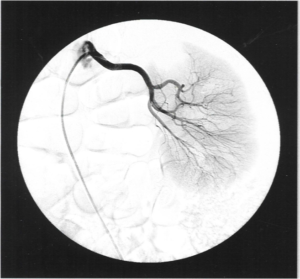 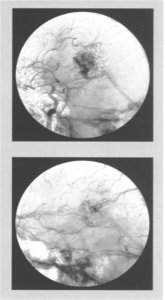 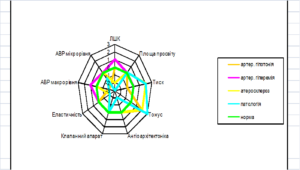 Angiology
Numerous researches dedicated to the study of hemodynamics in norm and at pathology resulted in creation of a special area of science – angiology that generalizes information about:
 regional angioarchitectonics,
 structure and functions of the vascular system in the human organism,
 its blood supply and circulation at different pathological states.
Estimation of hemoduct function on macrolevel
МАCROANGIOLOGY
 Investigation of pump function of the heart
 Investigation of great vessels of the head and extremities
 Investigation of veins of the head and extremities
 Investigation of appearance of blood filling and blood supply insufficiency on microcirculatory level as on the most distant segment of CVS (deep periphery, which is the most sensitive to ischemia)
 Decrease in pump heart function with evident reduction in blood filling in distal segments of arterial system and sludge phenomenon in microvasculature
 Impairment of elastic and tonic properties of great arteries’ vascular system resulting in formation of constrictive lesions of regional arteries
 Arteriovenous-hydrodynamic imbalance in case of apparent disorders in functioning of vascular system

Estimation of hemoduct function on macrolevel
МICROANGIOLOGY
If signs of impairment in microcirculation picture are revealed, one should look for disturbance of minimum one of segments of the integrated closed CVS.
If microcirculation “picture” is healthy, one may speak of sufficiency and adequacy of CVS functioning in the “heart – great arteries – capillaries – great veins – heart” integrated segment.
Investigation of microcirculation in finger and toe nail-bed is an arbiter of wellbeing of the whole vascular system.
The issue is described in the book 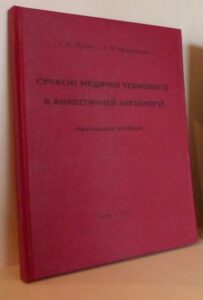 U.B. Lushchyk, V.V. Novytskyy
Modern medical technologies in analytical angiology. Manual. – К., 2011. – 120
The manual presents the analysis of the stages of development of medical instrument-making on the example of transformation and improvement of research for the cardiovascular system of human organism.